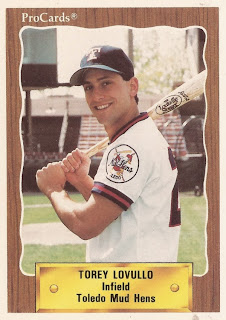 Torey Lovullo had a good spring in 1989 and made the Tigers. But he then started the year poorly and spent much of that season in the minors, The New York Times wrote.

So, when he had a similar good spring two years later with the Yankees, Lovullo was determined not to let that poor start happen again.

"It feels nice," Lovullo told The Times after a good outing that spring, "but it's just one day. I could go out there tomorrow and strike out four times. That's not going to happen, but I know that I have to stay on top and be consistent. I got complacent with the Tigers in 1989, and it hurt."

Lovullo went out and started the year with the Yankees, but he started it 0 for 11 and played in just 22 games in the majors that year.

Lovullo would have to wait two more seasons for regular time in the majors, and wait for another organizational change. In 1993, for the Angels, Lovullo got into 116 total games, by far the most Lovullo played in in one season in any of his eight seasons with time in the majors.

More recently, Lovullo has been trying to teach other players to be consistent, as a coach in the majors. He's also gotten consideration as a big league manager.

Lovullo's career began in 1987, taken by the Tigers in the fifth round of the draft, out of UCLA.

He played that first year at single-A Fayetteville and single-A Lakeland. He hit AA Glens Falls in 1988 and AAA Toledo that same year. He also made Detroit.

In 12 games, 21 at bats for the Tigers in 1988, Lovullo got eight hits. He returned for 1989, and promptly started the year 0 for 20. He stayed up through mid-May, but spent the rest of that year and the entire next year back in the minors.

Lovullo returned to the majors in 1991 with the Yankees, having another brief year in the bigs, 22 games. He then played 1992 entirely at AAA Columbus. He then signed with the Angels, who would keep him in the majors all of 1993.

"He's a power pitcher, so I knew what was coming," Lovullo told reporters later of Clemens. "I got out in front of it, and he supplied most of the power."

His playing career ended altogether in 2000, with a stint in Japan with Yakult.

By 2002, his post-playing career began, managing at Columbus in the South Atlantic League. He moved up to AA Akron in 2005, then AAA Buffalo in 2006. By 2010, he was managing at AAA Pawtucket, and getting some looks for big league managerial jobs.

The Indians interviewed Lovullo for the the 2010 season, and the Red Sox interviewed him for 2012.

"I worked a long time to get this opportunity," Lovullo told ESPNBoston.com after his interview with the Red Sox in November 2011. "I worked a long time in this game and had some great mentors and managers that I played for, gentlemen like John Farrell, who I have had a chance to work with that have helped me get this opportunity to sit down in this seat. I feel like I'm ready."

Lovullo wasn't picked either time, but he has spent both 2011 and 2012 in the majors, serving under Farrell as Blue Jays first base coach. In 2013, Lovullo served as bench coach for Farrell's World Series-champion Boston Red Sox.