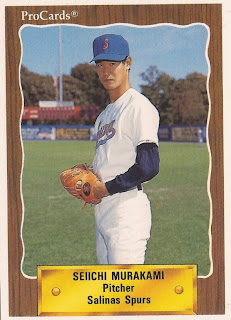 Seiichi Murakami saw time in 1990 on two sides of the Pacific.

With Salinas, Murakami got into a total of 25 games, eight of those starts. In Japan, Murakami got into just a single game. But that season in Japan eventually turned into five, Murakami not playing his final game in Nippon Professional Baseball until 1998.

Murakami's professional career began after high school, taken by the Daiei Hawks in the fourth round of the 1988 draft. He graduated from Kumamoto Kogyo High School in Japan. Murakami is also known by his Japanese name, 村上誠一.

That first year in 1990, Murakami's only recorded outing with Daiei was a four-inning outing where he gave up four runs, including a home run.

On loan to Salinas, Murakami fared a little better. Over those 25 games, Murakami went 3-5, with a 4.54 ERA. He struck out 69 and walked 33. It was Murakami's only season in the United States.

Back in Japan, Murakami returned to Daiei in 1991. This season, he got into five games, three starts. In 18.2 innings of work, he gave up six earned runs.

Murakami is not recorded as pitching for Daiei in 1992, but he was formally released by Daiei in November 1993.

Murakami didn't make it back to Nippon Professional Baseball until 1995, with the Hanshin Tigers of the Japan Central League. He got into four games that year, giving up seven earned runs in four innings of work.

Then Murakami's final outings came in 1998. He got three relief appearances for Hanshin, ending his career. He was formally released by Hanshin in October 1999.

According to his Wikipedia Japan page, Murakami has gone on to be a batting practice pitcher for the Hawks.