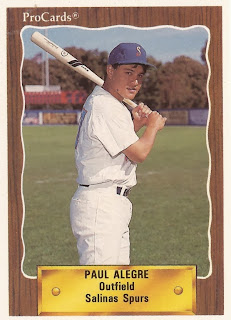 Paul Alegre got himself ready to play in high school by playing another sport, karate, The Orlando Sentinel wrote.

With that preparation, Alegre became a top hitter at Lyman High School in Florida, hitting .400 over two seasons there, according to The Sentinel.

"Karate has made me a much more disciplined hitter," Alegre told The Sentinel. "It also has helped by quickness."

Alegre used that quickness to go on to Murray State and to the pros. His pro career, though, was brief, just 17 games played over a single season.

Alegre's brief pro career came after a high school career that saw Alegre star for his local school. He hit a home run in a mid-April game, his fifth on the year. Later that month, he had a diving catch, the start of a game-ending double play.

With Lyman, Alegre made the All-County team with Lyman in 1985. He also made the Central Florida all-star classic.

From Lyman, Alegre moved on to Murray State. He won All-Conference honors in 1989, leading his team with four triples in 1989. That summer, he played in the National Baseball Congress, helping his team to the Florida state championship.

As a pro in 1990, Lyman played on two teams, but only got those 17 games. Alegre played three games with the independent Miami Miracle, going 1 for 4 with a double.