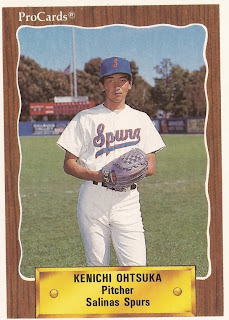 This was November 1992 and the Hiroshima Toyo Carp sent pitcher Kenichi Otsuka to the Seibu Lions for pitcher Koji Maeda.

Both Otsuka and Maeda played in the California League, Maeda for San Jose in 1988 and Otsuka for Salinas in 1990. And both had time in Japanese baseball, though Maeda had a much longer tenure, time in eight NPB seasons.

After the trade, only Maeda would return to Nippon. Otsuka had already played his final game.

For Otsuka, his career in baseball began in 1986, taken in the fourth round of the 1986 draft, out of Narashino High School in Japan. Otsuka's name is also spelled Kenichi Ohtsuka, with the Japanese form being 大塚賢一.

Otsuka's time with Nankai was brief that season. He is only recorded as pitching in one game, going four outs and giving up two hits, but no runs.

He returned to the renamed Hawks in 1989, playing another single game for the new Daiei Hawks. This time, he gave up three earned over four outs.

The next season, Otsuka moved to the United States, provided on loan to the high-A Salinas Spurs. With the Spurs, Otsuka got into 31 games, starting 23 of them. Four of those games were complete games. His record, though, came in at 5-10, with a 4.82 ERA. It was his only season in the United States.

His time in the United States over, Otsuka returned to Japan and to Daiei. He also again just got a single appearance. This time, he recorded only one out, facing just that one batter. His entire NPB career consisted of just those three appearances.

By the end of the year, Daiei released him. He then signed on with Hiroshima, and was traded to Seibu, but he is not recorded as playing for Seibu, his career ending soon after.