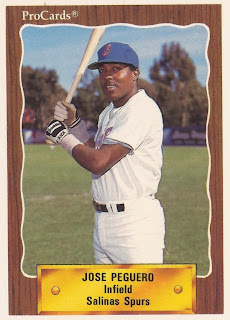 After three seasons off, Peguero returned to the game in 1994. In 1996, he set a Northern League record with 11 triples on the season. He also stole 21.

By the time Peguero's career was over, he could count time in a total of 10 professional seasons. Peguero, though, never saw time in the majors.

Peguero's professional career began in 1985, signed by the Athletics as an undrafted free agent, out of his native Dominican Republic. Peguero is also known by his middle name, Jeremias Peguero.

With the Athletics, Peguero started at short-season Medford, largely playing shortstop. He hit .283 on the year, stealing seven bases.

Peguero moved up to AA Huntsville for 1988. He hit just .219 over 108 games. His 1989 ended up being brief, just seven games played with the Brewers at single-A Beloit.

Peguero then turned to the independent Salinas Spurs of the California League, but his average didn't improve. He hit just .175 over 45 games, ending the first part of his career.

Seemingly out of baseball, Peguero then moved to New Jersey and got a job at a post office, according to The Los Angeles Times. He didn't return to the game until 1994, playing well enough at a tryout for the independent San Bernardino Spirit that he won a spot on the roster.

He returned for spring 1995 and replacement ball, playing with the Angels. He then got his first and only look at AAA, with 17 games in Vancouver. He played the rest of the year at independent Palm Springs of the Western League.