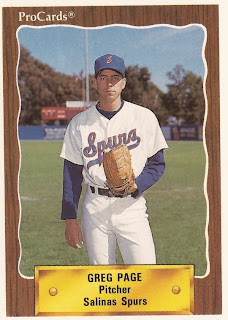 With the College of San Mateo Bulldogs opening up play in the state community college baseball tournament in California, they handed the ball to starter Greg Page, according to The Los Angeles Times.

With the offense doing its work by putting up nine runs, Page did his part. He did it by taking a no-hitter into the ninth inning against San Diego Mesa College to pick up the win, The Times wrote.

Page went from the College of San Meteo to the pros, eventually playing three seasons there. But he never made it above high-A.

Page's professional career began in 1988, signed by the Giants as an undrafted free agent out of San Mateo. At San Mateo, Page is counted on a list of former San Mateo players to make the pros.

With the Giants, Page played at rookie Pocatello. There, he got into 19 games, all in relief. In 39 total innings, he gave up 33 earned runs, for an ERA of 7.62. It was his only season in the Giants system.

For 1989, Page moved to independent Salinas in the California League. Page improved his stats in 14 outings, three starts. He went 2-3, with a 3.28 ERA. He also picked up two saves.