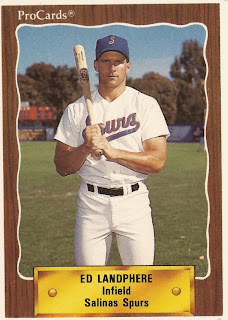 Ed Landphere's University of California-Santa Barbara Gauchos were on their way to a 7-6 victory over Fullerton in this March 1988 contest and helping them get there was Landphere.

In the seventh inning, Landphere smacked a double, knocking in a run, according to The Los Angeles Times.

That RBI was one of 54 he recorded on the year for UCSB that year. As a pro, Landphere would only knock in six. Landphere's professional career lasted all of 18 games.

Landphere's brief pro career began in 1990, signed by the independent Salinas Spurs as a free agent out of UC-Santa Barbara.