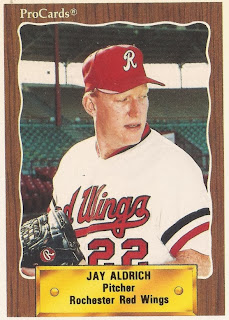 Jay Aldrich's numbers for the Brewers weren't bad in 1989. In 16 appearances, Aldrich posted a 3.81 ERA. But, by July, the Brewers just didn't have room for the right-handed reliever.

"It's just one of those numbers things," Brewers manager Tom Trebelhorn told the Milwaukee Sentinel. "It's not anything he hasn't done."

What happened that September was described in similar terms, a numbers game, as the Brewers dealt Aldrich to the Braves.

"We had a considerable need (for an infielder)," Brewers GM Harry Dalton told The Sentinel after the deal, "and had to fill it."

His major league debut came June 5, 1987, throwing two and two thirds of relief, giving up one run. That one run was a towering welcome-to-the-bigs home run from Dave Winfield.

"I'm pretty happy with the way I pitched, except that one pitch," Aldrich told the Milwaukee Journal. "That may be the hardest hit ball I ever gave up."

Aldrich gave up a total of eight home runs in 31 appearances that year for the Brewers. Another came July 25, off the bat of Jose Canseco. It was a batter Aldrich had faced before with similar results.

Just over three years earlier, the two faced each other in the California League and Modesto's Canseco connected off a 3-2 fastball off Stockton reliever Aldrich, crushing the ball for a walk-off win, according to the Modesto Bee.

After being shipped to Atlanta in September 1989, Aldrich pitched in eight games for the Braves before the year was out, posting a 2.19 ERA. He also earned his release. Signed by the Orioles for 1990, Aldrich pitched seven games for Baltimore, with an ERA that ballooned to 8.25.

It was his final year in pro ball, until 1995. Aldrich signed with the Pirates as a replacement player, described in the New York Times as among a group that hadn't played in four years. The strike ended, Aldrich's career ended again.