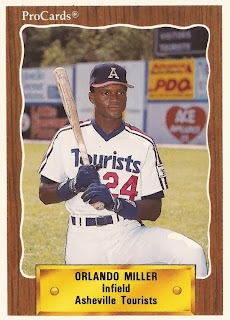 Orlando Miller's manager predicted he would homer that night as his Astros visited Wrigley Field, Miller's third major league game, Miller told The Chicago Tribune. And he did just that.

"It's exciting," Miller told The Tribune later. "My first homer. I'm surprised it went that far."

Miller actually did more that night. He hit a second home run, both his blasts flying completely out of the historic stadium.

Miller would go on to hit 22 more home runs in a career that spanned four major league seasons, ending in 1997. Miller's professional career, though, lasted much longer, with Miller continuing to play in the independent leagues into 2008.

Miller's career began in 1987, signed by the Yankees as an amateur free agent out of his native Panama.

Miller played his first year in 1988, between the rookie Gulf Coast League and single-A Fort Lauderdale. He moved to short-season Oneonta in 1989, hitting .291.

For 1990, the Yankees sent Miller to the Astros in a three-player deal. Miller played that year at single-A Asheville, hitting .313. Miller first made AA at Jackson in 1991, then AAA Tucson in 1992.

He first made Houston in 1994, debuting July 8. He got into 16 games before the strike began, getting 13 hits in 40 at bats, including those two home runs.

His year in 1996 was marked in August by a confrontation with fans after he struck out in one game. Suspended two games, Miller came back, hitting a game-winning home run in a game where he also committed two errors.

"You guys know what's been happening with me the last couple of days," Miller told The Associated Press after that game. "But you've got to move on. It was great to have the home run and now it's time to move on."

That winter, the Astros moved on, sending Miller to the Tigers in a nine-player deal. Miller got 50 games with Detroit in 1997, hitting .234. Those games turned out to be his final games in the majors.

Miller, though, continued in the minors, going through five different organizations over the next three seasons. His affiliated career ended in 2000 with 24 games in the Dodgers system.