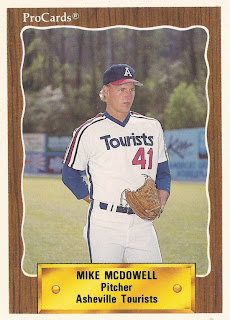 When his hometown parks and recreation department was eliminated, Mike McDowell and friend Bill Towey decided to respond, according to The Cheney Free Press in Washington State.

They responded in 2004 by starting a new sports business, Cheney Extreme Sports, The Free Press wrote.

"I wish we'd be full time doing this," McDowell friend Towey told The Free Press. "It's fun, more than our full-time jobs."

McDowell helped start that sports business after having once been a professional player. McDowell ended up playing three seasons in the Astros organization, never making AA.

McDowell's professional playing career began in 1989, taken by the Astros in the 53rd round of the draft, out of Eastern Washington University.

With the Astros, McDowell started at short-season Auburn, getting into 15 games, two starts. He picked up one win to four losses. His ERA was also higher than he likely wanted it to be, 12.58.

For 1990,  McDowell moved to single-A Asheville, getting 41 appearances, two starts. He brought his ERA down to 5.13. In an early-April game, McDowell went three innings, giving up one earned run. In another game that month, he went two innings without giving up a hit.

McDowell played 1991 at single-A Burlington in the Midwest League. But he only got into 17 games, his ERA hitting 6.56. It was his final year as a pro.