Jeff Wood, Into Baseball - No Number 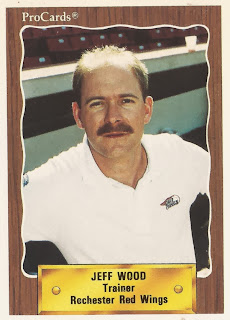 But there was another way into the game, he recalled: Being a trainer.

So, Wood became a trainer. And he's been involved in the game since, in both the minor leagues and, later, in college ball.

Wood's training career began in 1983, signed by the Orioles to serve as trainer for their rookie team in his home state, Bluefield.

He continued with Rochester in 1991. That year, he watched over the recovery from surgery of Jack Voigt, who went on to play in seven major league seasons. Wood believed he would recover fully, but he still had to watch the injury, Wood told The Sarasota Herald-Tribune.

"It's something he's got to be aware of for the rest of his baseball career," Wood told The Herald-Tribune.

Soon, though, Wood's own career took a different direction, one that led him to the University of Tennessee.