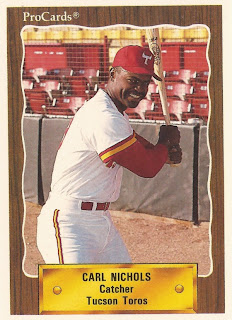 The pressure was high and Carl Nichols delivered.

The pinch hitter smacked a single to right, breaking up a tie game in the seventh inning Aug. 2, 1990, in a game Nichols' Astros went on to win 3-1.

"When you hit in key spots it makes you concentrate more," Nicholas told The Associated Press after the game. "It's making me a better hitter because I concentrate better when the pressure is on."

But those pressure situations in major league games would be few for Nichols. Nichols was in his fifth season with major league playing time that year, he was also in the season where he saw his most time, all of 32 games.

Nichols' career began in 1980, taken in the fourth round of the draft, out of Compton, Ca. He played that year at rookie league Bluefield, hitting .212 in 37 games.

He made single-A Hagerstown and Miami in 1981, but he didn't make AA, at Charlotte, until 1985. By then, he'd made stops in the Tigers and Angels systems, before returning to the Orioles.

Nichols made his major league debut in 1986, after a second year at AA Charlotte. He got into five games with Baltimore that September, getting five at bats and no hits.

Nichols got into another 13 games for Baltimore in 1987, getting a total of eight hits in 21 at bats. He got into 18 more games in 1988. Nichols also found himself with the Orioles in 1988, during the team's record-setting losing streak to open the season.

Nichols ended the game in which Baltimore set the losing streak record at 14. It was a fly out to right on a night where temperatures were in the 40s. Nichols, a catcher, had also spent time in the bullpen.

"All I was thinking about at the plate," Nichols told The New York Times afterward, "was to keep warm - it had been very, very cold in the bullpen and the wind was howling - and also to try to hit the ball some place."

Nichols got just nine hits in 47 at bats. At AAA Rochester, Nichols hit just .228. He worked that winter to get his hitting stroke back.

"I've been hitting since early November, four to five days a week," Nichols told The Modesto Bee in February 1989. "I feel like that part of my game is back. Hopefully, I'll get the opportunity to prove it."

Nichols, though, was traded in March to the Astros. He got into just eight games with Houston that year. Then came 1990, and the most games he'd see in the majors, those 32 with the Astros. He hit .204.

Twenty more games for the Astros in 1991 and Nichols' major league career was over. He continued playing on the independent circuit, though, through 1997.

Nichols more recently has worked with Major League Baseball's Reviving Baseball in Inner Cities through the Los Angeles Urban Youth Academy. In 2009, Nichols' academy team made it to the RBI World Series in Florida. Nichols told MLB.com his took a different approach with his team.