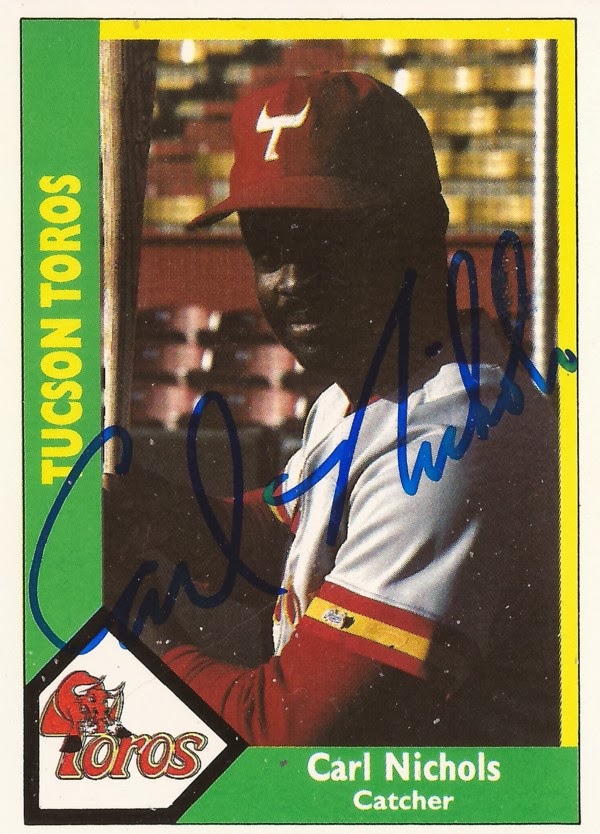 Carl Nichols played well that year for AA Charlotte, well enough that the 23-year-old catcher thought he might get a September call-up.

Drafted by the Orioles out of high school, Nichols was in his seventh professional season.

The news came a season's end: Nichols' manager called the catcher to his office and told Nichols he was going to the majors.

"I couldn't wait to get to the phone to call everybody," Nichols recalled recently to The Greatest 21 Days.

He met his new team the next day in Detroit. Over the next month, Nichols got six plate appearances, five at bats.

"It was a different world," Nichols recalled. "It was like night and day. But it also motivates to work had and to try to get back, that's for sure."

Nichols did get back and he did it in each of the next five years.
Nichols spoke with The Greatest 21 Days recently by phone from his native Compton, Ca. There, the six-year major leaguer works with young ball players from urban communities, trying to help them succeed and love the game like he did.

Nichols talked about growing up in Compton the member of a large family, learning the game from his brothers. He also talked about his choice of the pros over college, and his early struggles in the minors that made him think he'd made the wrong decision.

Then there was his career that saw time in six major league seasons, but never for more than 32 games in one year. Nichols' was a career spent behind others, getting playing time when he could. Once he got that playing time, though, he often shined.

He also spoke of returning to Compton, a community changed by drugs and violence and a community where the youth had seemingly left baseball behind.

Through Major League Baseball's Urban Youth Academy, and more recently his own not-for-profit, Nichols has made it his focus to help those youth get back into a game that itself has changed much since Nichols' youth.

Nichols grew up in Compton, the youngest of 10 siblings. All his older brothers played baseball, so Nichols did, too. Specifically, Nichols recalled, it was his brother Sam who started playing catch with him in the yard.
When Nichols was old enough for organized ball, he signed up.

"At the time, the structure was all there," Nichols said, "because at that time baseball was the thing to do."

The league he played in was close by, within walking distance of his house. It was easy to take part.

Since then, though, things have changed. Crack cocaine came into the neighborhoods, taking a lot of youth away from the game. Aside from that, there have been more mundane challenges. Basketball and football have simply overtaken baseball for the focus of minority youth, Nichols said.

The youth game itself has changed, with travel ball becoming the path to the pros, a path too expensive for many families to take on.

"A combination of those three things killed baseball for a little while," Nichols said.

Nichols is currently working to get his own not-for-profit off the ground, the Carl Nichols Baseball Academy, to help bring baseball back.

"Basically we've got to find a way to make it affordable for the kids," Nichols said. "What I'm finding now is that the kids are still playing at the younger ages. It's just that when they get to the teenage age, there's nowhere for them to play, at least not in the inner cities. So that's one of the things I'm working on right now."
In his own youth, Nichols recalled each of his coaches helping him out. Back then, he recalled, everybody helped everybody.

On the field, he was always good. The funny thing was, though, everybody was good. He wasn't necessarily the best on the field.

Still, he got noticed, quickly. When he was about 12 years old, Nichols played on a Little League All-Star team. There happened to be an Oakland scout at the game. That scout, he recalled, took the time to talk to Nichols' parents: Nichols had what it took to play professionally someday.

He kept working, and he kept getting noticed. By the time high school was up, knew he was going to get drafted. He really didn't think about where, he just knew he would be.

One of his older brothers told him not to worry about it. Nichols should prepare for college. That's what Nichols was going to do: Go to college.

When that day came, though, Nichols abruptly changed his mind. Nichols attributed the change of heart to outside pressures.

The Orioles took him in the fourth round of the 1980 draft, out of Compton High School. Soon after, the kid from Compton was across the country, in Bluefield, West Virginia.

"Like most high school kids, you think you're ready," Nichols said. "It was exciting, of course, but I kind of realized after I got there that I really wasn't quite ready for pro ball."
If he went to college, he probably would have gotten a little stronger, a little more mature. But he also had fun just playing baseball every day.

There were also the everyday issues of life on his own. He had to learn how to open up a bank account. He also had to learn to live in a town where everything shut down at 5 p.m.

Sent with him to Bluefield was another top Orioles pick, second-round selection Al Pardo. Pardo was also a catcher. As the higher pick, Pardo also seemed to get the preference on playing time.
Nichols had to go from playing everyday in high school to sitting on the bench half the time.

"It was tough, there were a couple times that I was going to quit, but I didn't," Nichols said.

One of those times he called his brother Billy.

"He basically told me, 'well, you can come on home, but there's nothing here for you. You might as well just stick it out,'" Nichols said. "That's the reason I stayed."

A few years later, Nichols was in the majors.