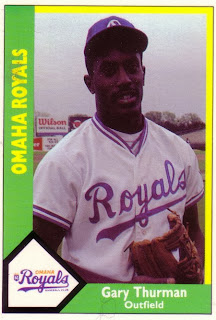 Back in August, I had some extra time off from the day job, so I decided to burn a couple days of it on some blog stuff, and hopefully some interviews.

After researching different options on the best place to go, I settled on Harrisburg, Pa. That's because the Harrisburg Senators were playing the Reading Fightin' Phils. In the ballpark, as far as I knew, were three players in my project.

The Senators had two, hitting coach Eric Fox and pitching coach Paul Menhart. The Fightins had hitting coach Frank Cacciatore. All three, it turned out, were up for interviews. Add to those, there was also local youth instructor Gavin Osteen. He was also up for being interviewed.

So that was my trip. Four interviews, worth it. As it turned out, though, I ended up doing five. That's because an off-hand mention by Eric Fox turned into a fifth interview, one with former Royals outfielder Gary Thurman.

It was actually the second time I've been surprised with a bonus interview. The first time was a 2011 trip to Lowell, Mass. On that trip, I was expecting to interview Lowell's pitching coach Paul Abbott and visiting Aberdeen manager Leo Gomez.

Abbott, though, spotted the card I had him sign, his CMC card with Portland, and pointed out there was another 1990 Portland player there that night, Vic Rodriguez. Rodriguez happened to be in town working with Lowell's hitters as the Red Sox' roving minor league hitting instructor.

That made me thankful for having a smart phone. Having only a couple minutes lead time, I quickly went over my previous Rodriguez post and seemed to put together a coherent, quick interview. (The other cool thing about that is Rodriguez is now in Boston for 2013, as assistant hitting coach.)

Not expecting to interview Rodriguez, I had to mail him his card to sign. He actually got it back pretty quickly.

For Thurman, it was Fox' mention that led to my interview with him. Though the time was tight, Thurman was good enough to take the time out to speak with me. Again having a few minutes lead time to research, it seemed to turn out well.

And I would have had the interview up sooner, but I was hoping to have the signed card with it. Hopefully that's on its way. But here's the interview, the bonus one from Harrisburg. It should be posted soon.

Email ThisBlogThis!Share to TwitterShare to FacebookShare to Pinterest
Labels: Interview