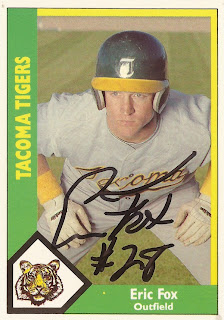 HARRISBURG, PA - Eric Fox heard horror stories of guys getting called up to the bigs, but never getting activated, never getting into a game.

If Fox, who was flown to Detroit to join his Oakland A's there, was activated, got into a game this July in 1992, it would be his major league debut.

The problem was, there was still a chance that the guy he was supposed to fill in for, Oakland's Rickey Henderson, would play. The situation was uncertain enough that Fox didn't even tell his family he was there.

"They had a locker with my name on top," Fox recalled to The Greatest 21 Days recently of that day at Detroit's Tiger Stadium, "but my bags weren't unpacked."

After sitting at that locker for what seemed like 20 minutes, Fox saw the reason he was there, the future Hall of Famer Henderson. Henderson was coming in from batting practice, sweating and laughing.

Fox remembered thinking to himself that his fears would come true. He'd made the trip, but he wouldn't make his debut.

But Henderson didn't put on his uniform, he put on a suit

"All I remember was seeing him walk up the stairs so I couldn't see his feet anymore," Fox recalled of Henderson leaving the clubhouse. "Then (Oakland manager Tony) LaRussa put his head around and said, 'Hey Rookie, come sign your contract. And that's when it hit me."
In his seventh season as a pro, Fox had made the majors. It was time to call his family.

"That's one of the stories I tell these guys," Fox, in his second season as hitting coach at AA Harrisburg, said. "You never know what's going to happen in this game. You might get the opportunity one time. You better be willing to step through the door and accept it, because it might not ever come back again."

Fox ended up getting opportunities in three more major league seasons, totaling time in 116 major league games. He is now hitting coach for 2013 at Harrisburg, working with young Nationals prospects, trying to get them on to Washington.

Fox spoke with The Greatest 21 Days before an August 2013 game at Harrisburg's Metro Bank Park. Fox covered his run to the majors, efforts to get back and stay there - but get back cleanly.

He also told of his home runs. He only hit five in his big league career, but he made them count, hitting one for his first major league hit, hitting a ninth-inning, game-winner later that same month and then an Opening Day grand slam to start 1993.

Fox grew up in Southern California, moving to Fresno and Fresno State for college. He remembers his parents telling stories of his love for the game dating back to before he could walk. There are pictures, Fox said of him playing with a baseball in his crib.

Baseball, he said, was always his first love. He played football in high school and even thought he was better at that than baseball then. And he was. Football, he said, was actually the reason he went to Fresno State, he was there on a football scholarship.

An injury his sophomore hear helped him decide to return to baseball.

"Baseball has always been in my blood," Fox said, noting the challenge of overcoming failure.

"There's such a big failure rate in baseball," Fox said, turning his thoughts to his Harrisburg hitters. "We're trying to tell our guys here, We're going through it right now. You don't have to like failure, but you need to learn how to deal with it. The good players move on, learn from their failures, and it makes them better."

"I was really, really bad the first year and Bob Bennett says, 'You know what, if you want to play past college, this is going to help you down the road.'"

"And I thank him immensely," Fox said of Bennett, "because I would have never gotten to the major leagues, I don't think, unless I was a switch-hitter."

It was also in college that Fox blew out his knee.
Playing in Venezuela at the 1983 Pan-American Games, Fox' cleat caught in the ground. He knew before he hit the dirt that something was seriously wrong.

"The worst pain I had ever experienced," Fox recalled. "I basically needed to teach myself how to jog again."

The question was, could he get himself back to even playing again? "You have to be mentally tough," Fox said of the rehab.

He did return. And he In the meantime, he also studied. By January 1986, Fox had his degree.

Having passed two previous chances at the pros, and having that degree in-hand, Fox accepted when the Mariners came calling in the first round of the January draft.

Later, when Fox made AAA, Fox blew out his other knee, his left knee. He had made it one step away from the majors, but found himself again trying to get back on the field.

Through that rehab, Fox said he knew he would get back.

"There was never one day of doubt that I was going to make it to the big leagues," Fox said. "And that's what probably got me over the hump."

In there is also another lesson for Fox' young hitters at Harrisburg.

Fox got past his rough spots to make Oakland. After a couple rough games to start his career, Fox believed he could hit, and he did.