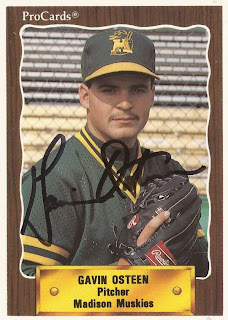 HARRISBURG, PA - By summer 1998, Gavin Osteen was a year into his return to the game.

Four years earlier, he'd been on the brink of making the major leagues, but a brief illness and a far-more-serious injury soon after thwarted that opportunity.

But, in 1998, Osteen had word his way back from that injury to get mentioned again as a possible major league call up, he recalled. It was another call that never came.

As it turned out, in 13 seasons, Osteen never did make the majors.

Osteen is now trying to teach youth in the Harrisburg, Pa., area the game, offering lessons through Full Count and tournaments through Future Stars Tournaments.

Osteen spoke to The Greatest 21 Days in August 2013 at his Harrisburg training facility. He spoke about his youth, growing up in Pennsylvania in a baseball family. His father Claude Osteen played and coached in the majors. His oldest brother Dave Osteen, also played as a pro.

Gavin Osteen also touched on his own run through the minors, making it to AAA and even getting his call to the bigs, only to have illness, then injury prevent him from taking that last step.

Osteen grew up in central Pennsylvania the youngest of four siblings and the son of a major leaguer. As the youngest, by the time Osteen was old enough to go to ballparks with his father, his father's playing career was over and his coaching career had begun.

Claude Osteen played 18 seasons in the majors, spending some of his best years with the Dodgers. The father played his final season in 1975 with the Cardinals, becoming the team's major league pitching coach in 1977.

When Gavin got to be with his father at games, he recalled, he couldn't sit in the dugout. But he could do other things, he recalled.
"That didn't bother me one bit," Osteen recalled of not getting to sit in the dugout, "because I was in the tunnels underneath the stadium playing Home Run Derby in the batting cage."

As far as going into the game himself, Osteen recalled his father never pushed him, or his brothers. In fact, two of his older brothers went on to other things. Only Gavin and his oldest brother Dave Osteen continued with the game to play professionally.

Gavin recalled competing with Dave often enough to improve his own skills.

"When we would compete," Gavin recalled, it brought out the best in me and I became a good player in a lot of sports because of his influence."

Growing up, Gavin also understood that his father had a job to do, one that took him away for half the year.

It was something he never really even thought about. That was just the way it was.

"With Derrick, my oldest son, it was kind of like the same way I grew up," Osteen said. "I didn't know anything else. I don't know how it affected him. I think he understood."

With his own development, Osteen said he got some interest early on as a left-hander who could throw in the upper 80s. He added speed at Allegany College of Maryland by lifting.

The lifting, Osteen recalled, had been kind of taboo growing up, the thinking being it might impact flexibility. That changed at Allegany, Osteen recalling his coach making him wake up at 5:30 in the morning to lift with the rest of the pitchers.

When it came time to be drafted, Osteen recalled getting told he would go higher. He ended up going in the 9th round, to the Athletics. He was the last to sign, Osteen finally thinking it was time to turn pro.

"I needed to start making a living and go ahead and follow the dream to see where it takes me," Osteen said.

"There was no nervousness, not one bit," Osteen added.

He also recalled never being homesick, that it never entered his mind. He attributed that to growing up in major league clubhouses.
Once in the pros, Osteen recalled having to essentially relearn how to pitch. Osteen had learned some things in high school and in college, as well as from his father.

But, actually being out there and pitching against professional hitters, that was different, he recalled.

"When I got out there, I was like 'woah,'" Osteen recalled of those first outings at short-season Southern Oregon in 1989. "You just can't rear back and let it go and wherever it goes, it goes. You have to fine tune things.

"If you miss your spot," Osteen recalled, "these guys are going to hurt you."

Osteen worked on his different pitches and how to place them. He had his cut fastball, his curve, his changeup. He also had his two-seamer.

"I started to learn in and out, up and down, mixing speeds, pitching backwards, that kind of stuff," Osteen said. "I think for the most part, I didn't perfect it, but I was pretty dang good at it,"

By 1994, Osteen was good enough at it to be on the doorstep of the majors.