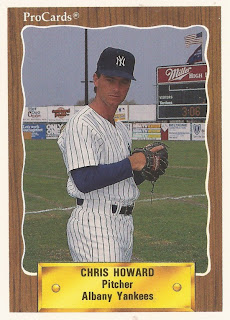 Injured at AA Albany in 1990, Chris Howard knew he wasn't throwing well. Eventually, that led to the pitcher's essential retirement, The Chicago Tribune wrote in spring 1992.

But then he started to feel better. And he signed with the White Sox. By that spring in 1992, Howard was on the door step of the majors, The Tribune wrote.

It took Howard until September 1993, but he made it all the way to the majors.

Howard's professional career began in 1986, signed by the Yankees as an undrafted free agent out of the University of Miami.

At Miami, Howard was a position player and hitter. In March 1986, he spoke to The South Florida Sun-Sentinel about fixes he'd made in his swing that then had hit hitting .415.

"I had always batted with my back elbow up and I more or less stood with my back straight at the plate," Howard told The Sun-Sentinel. "I talked with coach (Ron) Fraser and (assistant coach) Jim Pizzolatto, and they worked with me on dropping my elbow and leaning over more at the plate."

Signing with the Yankees that summer, Howard played his first season as an outfielder-first baseman, playing between rookie ball and short-season Oneonta.

For 1987, Howard played 79 games at outfield, but four at pitcher. He then moved to pitching full-time for 1988, playing largely at single-A Prince William. In 18 outings, Howard posted a 2.34 ERA.

He then split 1989 between single-A Fort Lauderdale and AA Albany. For 1990, Howard returned to Albany, getting just two outings there before suffering that injury. Moving to the Indians and single-A Kinston later that year, Howard got just eight more outings.

Then, for 1991, Howard signed with the White Sox. Assigned to AA Birmingham, Howard got 38 outings, with an ERA of 2.04. He also picked up six wins and nine saves.