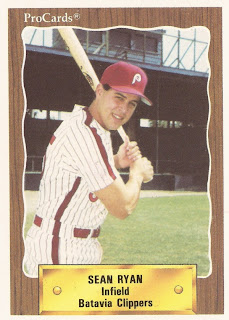 Starting his second season as a pro in 1991, Sean Ryan made the jump from short-season Batavia to AA Reading, The Reading Eagle wrote that May.

The difference was visible in his surroundings, and his batting average. In 14 games, The Eagle wrote, Ryan was hitting just .234.

"The thing that helps," Ryan's manager Don McCormack told The Eagle, "is Sean's ability to take bad pitches and to swing at good pitches. He has a very good eye for someone as inexperienced as he is."

Ryan went on to hit .246 that season and .268 the next, also at Reading. He ultimately made AAA Scranton in his fourth pro season, but that was as high as Ryan got. He never took his good eye to the majors.

Ryan's professional career began in 1990, taken by the Phillies in the 38th round of the draft, out of Rutgers.

He then made that jump to Reading for 1991, his home run total dropping off to just eight on the season. He did knock in 70 runs, three in one April game against London.

Ryan also hit one of those 1991 home runs in a June game, a two-run shot to win the contest.

"It was a low, inside fastball," Ryan told The Eagle of that home run. "I knew it was hit on a line-drive, so I just started running hard as soon as I hit it."

Ryan has since settled in the Charlotte area, watching his son Ryder Ryan take up the game his father once played, according to The Charlotte Observer. Ryder Ryan was a freshman at North Mecklenburg High in April 2011 and contributing to his school's squad.

"My dad has been a huge part of my game ever since I played T-ball," Ryder Ryan, then 15, told The Observer in April 2011. "I've learned almost everything I know from him. I continue to learn new things as I keep playing the game."