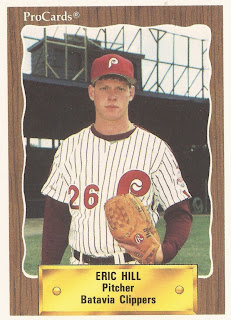 Eric Hill did his part to break the 1995 Reading Phillies out of a June slump, or at least not make it worse, according to The Reading Eagle.

It was Hill and another pitcher who together threw 3.1 innings without giving up a run. They also struck out eight in the Reading win, The Eagle wrote.

"We just need some breaks to get out of this," Hill told The Eagle afterward. "We've got a good team here. We've just hit that hill. But I think we'll be all right."

Hill's professional career began in 1990, taken by the Phillies in the 43rd round, out of Walters State Community College in Tennessee.

With the Phillies, Hill started at short-season Batavia. He got 10 outings, eight starts, going 2-4, with a 4.02 ERA.

Hill then played exclusively at Reading in 1993, but for a shortened 21-outing season. In May, Hill picked up a win against Albany, pitching into the seventh. At the end if July, Hill with a knee ligament tear, The Eagle wrote.

Hill came back for a full season at Reading in 1994, getting 46 outings, six starts. For 1995, Hill played at Reading, but he also got his only look at AAA Scranton. At Scranton, Hill got 21 outings, with a 4.30 ERA, ending his professional career.