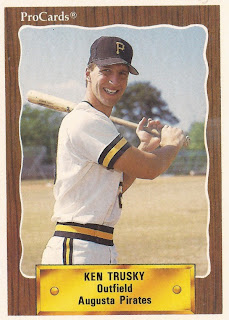 Ken Trusky didn't want to worry much about the future, he told The Pittsburgh Post-Gazette after being drafted in 1989.

What he needed, was a good start.

"I just want to get into a situation where I'm playing every day in Welland," Trusky told The Post-Gazette, "getting a few chances to hit, and hopefully improve."

Trusky ended up getting a good enough start with the Pirates that year to get a mid-season promotion to single-A Augusta. Trusky, though, couldn't turn that start into a long professional career. He ended up playing just three seasons, never making it to AA.

Trusky's pro career began that year in 1989, taken by the Pirates in the 27th round of the draft. The Pirates also selected a hometown kid. Trusky graduated from Swissvale High in the Pittsburgh area. He was also drafted after Trusky first went to Alabama for college ball, then transferred to Maryland.

After his senior season at Swissvale, Trusky looked forward to going to Alabama. That summer, though, it was American Legion ball. Trusky had already done more than enough to impress his high school coach, according to The Pittsburgh Press.

"He works hard," Trusky's high school coach Bill Biesecker told The Press in July 1985. "If he has a bad night he'll be at the batting cage the next day. It's that kind of extra dedication that separates him from all the others. He has that special desire to excel."

Coming out of college, Trusky started with the Pirates at short-season Welland, before moving to Augusta. He hit .339 at Welland, but just .243 in 26 games at Augusta.

To start 1990, Trusky returned to Augusta. That April, Trusky told The Post-Gazette about the dangers of looking too far ahead.

"My only goals are to play every day and stay healthy," Trusky told The Post-Gazette. "I'd like to move up this year like I did in the middle of the season last year, but I just have to take things day by day. As soon as you start thinking about moving up, that's when you don't."