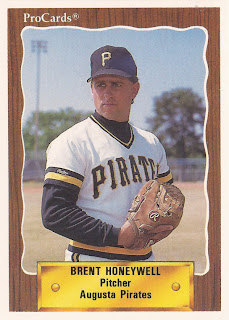 That wasn't unusual. What was unusual, according to The Independent Mail, was the aspect itself: Having his pitchers regularly throw six-pound shot puts.

"I had sore arms and everything else before I went to college," Honeywell told The Independent Mail after his selection as Franklin High baseball coach in Georgia in 2007. "Since then – nothing whatsoever. This (regimen) will increase velocity from seven to 10 miles per hour. But these guys have got to do it. They've got to do it every day."

Honeywell took what he learned in college on to a pro career that lasted three seasons. He's also taken it on to a high school coaching career that's lasted two decades.

Honeywell's pro career started in 1988, signed by the Pirates as an undrafted free agent out of Saint Leo.

With the Pirates, Honeywell started in the rookie Gulf Coast League and at rookie Princeton. Between them, he got 14 outings, posting a 2.68 ERA.

He moved to single-A Augusta in 1989, getting 26 relief outings and even picking up eight wins. His ERA was 2.98. He also picked up one save, getting it in a seven-out June outing.

For 1990, Honeywell returned to Augusta, getting 13 relief outings there, posting a 1.15 ERA. By the end of April, the lefty had 10 appearances and a 0.71 ERA, according to The Beaver County Times.

Soon, Honeywell moved up to high-A Salem. There, though, his ERA hit 6.65 in 22 outings. It ended up being Honeywell's final year in pro ball.

Honeywell has since gone on to a long high school coaching career in Georgia. He arrived at Franklin County in 2007.

In 2009, Honeywell prepared his team for the playoffs, using his own experiences as a guide, according to The Times-Georgian of Carroll County.