Be sure to read the June 2014 interview: Kelvin Torve, Worked Harder 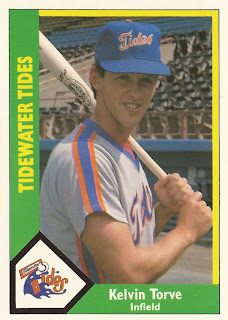 Kelvin Torve had been waiting for this. In his eighth professional season, he was making his major league debut. His first at bat also came with a chance to put his team ahead.

All he had to do, according to The Associated Press, was get a hit off of future Hall of Famer Dennis Eckersley. Torve, though, couldn't do it, he struck out.

"That's what I wanted," Torve told The AP of the opportunity. "I wanted the first at-bat to be a chance to go up and win the ball game. At least I got the chance. I could be playing at Portland."

Torve's career began in 1981, taken by the Giants in the second round of the draft, out of Oral Roberts University.

He started at single-A Clinton, making AA Shreveport his second year and then AAA Phoenix his third. At Phoenix in 1983, he hit .260, with 54 RBI, but he didn't take the next step to San Francisco. Instead, he spent the next two seasons back at AA.

For 1988, he signed with the team that would bring him to the majors, the Twins. He got into 12 games that year for Minnesota, getting three hits in 15 at bats.

In early July, Torve came through, getting a late single to tie a game as a pinch hitter.

"It's a little nerve-wracking having to come off the bench, but you have to fight through it," Torve told The Patriot Ledger News Service after the Twins win.

Torve's next shot at the majors didn't come until 1990, when he signed with the Mets. He got into 20 games for the Mets that year and 10 the next, rounding out his big league career.

Just after his call up in 1990, Torve found himself in another pressure situation, pinch hitting in a tie game with runners in scoring position. He hit a double to give the Mets the runs they needed.

"I was overjoyed when I reached second," Torve told UPI after the win. "I never had that feeling in the minors. I shortened my swing and tried to drive the ball."

Torve's time with the Mets in 1990, though, also included a mini hot streak, going 6 for 11 to start his big league run. The streak happened to coincide with him wearing No. 24, the same number worn by Willie Mays as a Met, according to the book "Mets by the Numbers."

Torve was then issued a different number, Mays' number being unofficially retired. Torve, though, didn't seem to care, according to the book. At least he was in the majors.