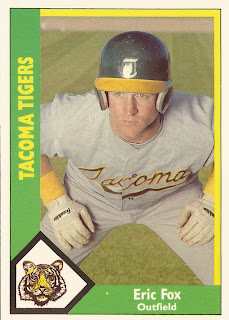 Opposing manager Sparky Anderson could only tip his cap to Oakland's Eric Fox and the shot hit by Fox that opening day in 1993.

"It was a good ball game until the kid hit the grand slam," Anderson told The Associated Press after the game. "He didn't hit a cheap one. He smoked it."

Fox' career began in 1986, taken by the Mariners in the first round of the January draft out of Cal State Fresno.

Before spring 1989 was out, Fox was released. He soon signed with the Athletics, though, the team that would bring him to the majors three years later.

Fox played that year back at AA, at Huntsville, moving to AAA Tacoma in 1990 and remaining there for 1991.

Before his call-up to Oakland in July 1992, though, Fox was back at AA. His call-up was the result of injuries on the big league team, the AP wrote.

In his third game with an at bat, Fox got his first hit: His first home run, off Toronto's Juan Guzman. The home run came after Fox used a pool game to predict to another player he later learned was David Wells that he'd get his first hit off Guzman, The Los Angeles Times wrote.

"We were playing pool and I popped off," Fox told The Times. "I didn't know who he was. When I found out, I apologized and asked him not to tell Juan. I didn't want a fastball in the ribs."

By the time the month was out, Fox had hit another home run. This one proved a game-winner. Down 4-2 in the ninth, with two on, Fox hit a three-run shot to give the Athletics a win over the Twins.

"It was one of the most exciting moments of my career," Fox told The AP of that home run.

Days before that game, Fox picked up two hits in one inning, as Oakland batted around in an inning. Fox ended up getting into 51 games for Oakland that year. He hit three total home runs, stealing three bases. But he also hit just .238.

Fox's final two seasons in the majors amounted to 26 games with Oakland in 1994 and 10 with Texas in 1995. Fox, though, played at AAA for two more seasons, in the Dodgers, Phillies and Orioles systems, ending his career.

His playing career over, Fox began a coaching career, one that is set to extend into 2012.

Fox started in 1998 as hitting coach with single-A Columbus in the Cleveland system. By 2002, he was manager at AA Portland. For 2012, Fox is set to be hitting coach at AA Harrisburg.

In 2002, as he took the reins of Portland, Fox explained his philosophy to The Lewiston Sun-Journal.

"From day one, I want them thinking about being in the postseason," Fox told The Sun-Journal. "I think in order to achieve something, you have to be able to picture it in your mind. I want them to have that vision."