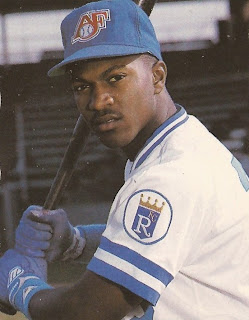 Kerwin Moore was glad to get away from home and sign a contract with the Royals, but not for the usual reasons of growing up and moving on, The Eugene Register-Guard wrote in 1989.

The 1989 Eugene Emerald Moore grew up in inner city Detroit. One of his closest friends, he told The Register-Guard, was killed related to drugs the previous year. His best friend also became a target, and he had to stay away from him.

"Sure, I missed my mom," Moore told The Register-Guard of leaving home, "but I wanted to play baseball. And I wanted to get away from the drugs and everything. I was used to it. But I didn't want to go around all the time having to watch my back."

Moore joined the Royals in 1988, taken in the 16th round of the draft out of Detroit's Martin Luther King High. He would also eventually make the majors, but not with the Royals. Moore made the majors in 1996, playing 22 games with the Athletics, the extent of his major league career.

In that first season in the Gulf Coast League, Moore stole 20 bases, but he hit just .176. For 1989, he moved on to short-season Eugene, hitting better, but still hitting just .221. He also picked up another 20 stolen bases.

Single-A Appleton was the destination for 1990. While his batting average remained consistent, his speed picked up. He stole 50 that year. In 1991, at high-A Baseball City, Moore's speed picked up even more, swiping 61 while still hitting .210.

In December 1991, Moore was counted by The Lawrence Journal-World as among weak group of young outfielders. Moore, a Journal-World columnist wrote, couldn't make contact.

For 1992, Moore split time between Baseball City and AA Memphis. He stole 42 bases between them, but also hit .237. He started fast, though, getting three hits in one early April game for Baseball City.

That November, the Royals left Moore unprotected in the expansion draft. The Marlins picked him up in the third round. With the Marlins, Moore returned to high-A, at High Desert.

In December 1993, Moore finally arrived with the team that would bring him to the majors, traded to the Athletics for Kurt Abbott. Talked about as a possibility for the Oakland starting center fielder job in spring training, Moore played out the year at AA Huntsville.

Moore made his major league debut Aug. 30, 1996. In 22 games, Moore got 18 plate appearances and a single hit. That hit came in the eighth inning of the Sept. 14 game. Moore was only in the game after teammate Jose Herrera suffered a sprained wrist, The Associated Press wrote.

After his big-league experience, Moore played 1997 in independent ball, with the Northeast League's Catskill Cougars. He hit a three-run home run in one June game.

Moore returned to the Athletics system for 1998, playing back at AA Huntsville. He finished out his career in 1999, playing in the Western League and the Mexican League. 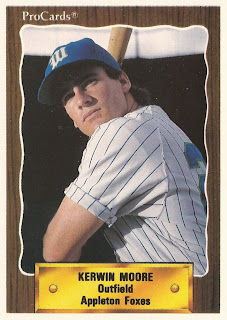