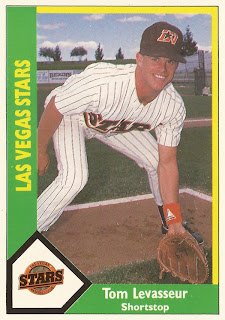 Tom LeVasseur amassed a 15-game hitting streak his in his first pro year at short-season Spokane. He'd also done well in the field.

Both prompted praise from his manager Rob Picciolo, according to The Spokane Chronicle.

"He's been so consistent physically and as far as emotional leadership on the team goes," Picciolo told The Chronicle. "Every day he comes to play. He performs well every day. I'll take him as far as any shortstop in the league."

LeVasseur did go on to teach those qualities to younger players, as both a coach and manager in the minors.

LeVasseur's professional career began that year in 1986, selected by the Padres in the 8th round of the draft out of San Diego State University.

With San Diego State that May, LeVasseur helped the Aztecs to a 2-1 win over Hawaii with a sacrifice fly.

"I didn't want to pull the trigger until I got something I could hit in the air," LeVasseur told The Los Angeles Times after that Aztec win. "As soon as I hit it, I knew it was deep enough."

LeVasseur spent his first professional year at short-season Spokane. There, he hit .372 in 53 games, including that 15-game hitting streak. That was despite being out three weeks with a finger injury.

He returned with the Mariners in 1994, playing at AAA Calgery and coaching, The Times wrote. For 1995, he was managing in the Arizona Rookie League. It was starting at the bottom for LeVasseur.

"This is the heart of the game," LeVasseur told The Times of his first managerial gig. "There are no fundamentals here. Anyone who had a command of the fundamentals wouldn't be here."