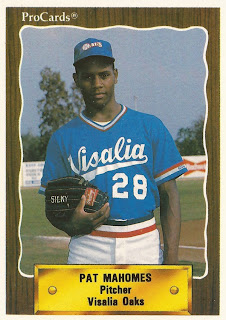 Once a top prospect, Pat Mahomes had never become the star he thought he'd be, The New York Times wrote in 1999.

But, in 1999, after a trip to Japan, Mahomes experienced a resurgence, The Times wrote. Helping with that was an attitude change.

"I figured I wasn't a boy anymore. I knew I would have to work harder just to get a good look," Mahomes told The Times. He added later, ''I just worked hard. And now it seems like it's all paying off."

Mahomes got 39 appearances that year for the Mets, winning eight games in relief against no losses. His next two seasons, with the Mets and the Rangers, he would get into even more games, more than 50 each.

In all, Mahomes saw time in 11 big league seasons, plus one in Japan. His playing career itself would span more than two decades. He's now watching another Mahomes play baseball, his teenage son Patrick II.

Mahomes' career began in 1988, taken by the Twins in the sixth round of the draft, out of Lindale High School in Texas.

He played that first year at rookie-league Elizabethton, making high-A Visalia in 1990. In 1991, he hit AA Orlando and AAA Portland. Mahomes went 11-10 between the two, posting a combined 2.32 ERA.

In April, at Orlando, Mahomes took a no-hitter into the eighth inning. In May, he struck out 16, according to The Orlando Sentinel. "You won't see a better-pitched game at the Double-A level,'' Orlando manager Scott Ullger told The Sentinel after the 16-strikeout effort.

Mahomes opened the next spring as the Twins' first spring starter. In April, he was with the big club. He picked up wins in two of his first three starts, but ended 3-4 in 13 starts. For his first win, Mahomes went six innings, giving up one run on five hits.

"The kid did a great job," Twins manager Tom Kelly told The Associated Press after Mahomes' first win. "He's going to have a helluva future. He throws hard enough and he mixes 'em up pretty well."

"I don't know if it's a matter of me progressing or not," Mahomes told The AP after that outing. "I'm just keeping the ball low, hitting spots, mixing up pitches, putting the ball in play and letting the defense make great plays."

In 1995, Mahomes moved to largely relief, getting into 47 games, but taking the loss in 10. He stayed with the Twins into August 1996, when Minnesota traded him to the Red Sox. He only lasted with Boston into July of the next year, when he was released.

"I worked so hard to get back, and it seems like it's all paying off,'' Mahomes told The Times after his fifth win. "The 5-0 record and the hitting, all that's a plus. I'm just trying to re-establish myself."

Mahomes got 53 outings in 2000, with a 5.45 ERA. He fell short of the Mets' postseason roster, though on the team's run to the World Series. In 2001, Mahomes played for Texas and got 56 appearances. His final time in the majors came in 2003, nine outings with the Pirates.

Mahomes, however, continued playing through 2009, his last affiliated time coming in 2007. His final two seasons came in the independent leagues.