My wife does roller derby and has for about a year now. As anyone who is familiar with roller derby knows, with derby comes injuries.

She hasn't gotten into a bout yet, that's because of the injury thing. Knees have been the big injury, twisting and impacting and all.

But the reason I mention this is because it was another derby injury Saturday that sent me to the local Rite-Aid for some medical tape. Along the way, I picked up some cards.

My wife got back from practice Saturday with an injured pinky. Apparently there was a pile up and her pinky got the worst of it.

What she needed was some medical tape, to tape the pinky to her ring finger. A teammate/medic suggested it. I've also suggested bubble wrap, wrapping her entirely in it to prevent any further injury. She did not have me go pick that up. 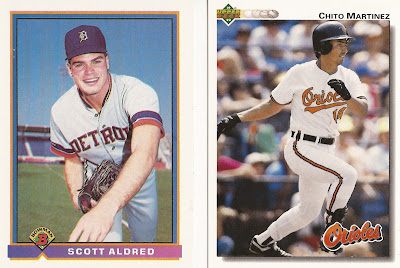 I found the medical tape, and on the way out picked up one of those repacks of cards, the $5 Jumbo Pack. But it was fun to open.

It kind of reminded me of back in the day when you could go anywhere and pick up cards, including the gas station. Now you rarely see them anywhere other than hobby shops, Wal-Marts and Targets and sometimes Rite-Aids.

Out of the 100 cards, I picked up a good 10 CMC set members, including the ones pictured here. There were three 1988 Donruss CMC set members there. I thought I scanned them, but by the time I realized the scanner didn't catch them, they were already put away. So I guess you'll have to go without seeing my '88 Donruss haul. 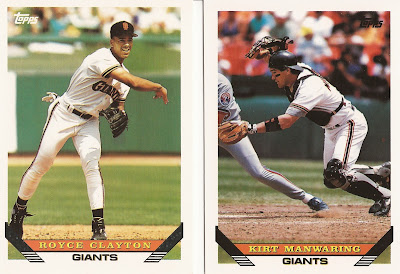 Of the seven the scanner didn't eat, I've featured five. The links to those five are below.

Email ThisBlogThis!Share to TwitterShare to FacebookShare to Pinterest
Labels: Search