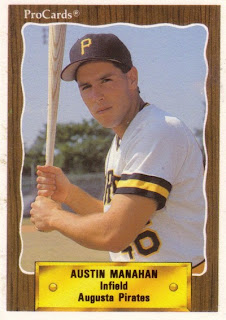 But the first-round pick also came to the Pirates straight out of high school and Pirates minor league hitting instructor Hal McRae told The Press Manahan had started higher than he should have.

"If you're in over your head," McRae told The Press in spring 1989, "it doesn't matter. You're sort of in a free fall. You have to just throw that out. Once you start trying to catch up you're not the same hitter any more. It's another guy up there with your number on his back. The party's over."

Taken by the Pirates as the 13th overall pick in the 1988 draft with the highest of hopes, Manahan never did get out of that free fall. He went on to a professional career that spanned eight seasons, but he never made it above AA.

The Pirates, though, still believed in that spring of 1989 that Manahan could pull out of it and become the player they projected he'd be at the 1988 draft table.

By their calculations, Manahan was the fifth best player available in the draft, according to The Pittsburgh Post-Gazette. They got him at 13, taking him out of Horizon High in Arizona. Others, however, had him in the second round.

"We were going Manahan all the way," Pirates scouting director Elmer Gray told The Pittsburgh Post-Gazette after the draft, "If he was there."

Sent to rookie league Princeton, Manahan got off to a slow start. He was already talking about that slow start in early July, just over a month after he was selected.

"I knew I'd be playing in a small town, that it would be tough and that I'd struggle," Manahan told The Associated Press. "And I have."

Those struggles continued into 1989, starting at extended spring training, then playing back at Princeton, and moving to short-season Welland. He hit .219 on the year.

That average, however, picked up in 1990, playing at single-A Augusta and high-A Salem, hitting .295 between them and hitting 11 home runs.

At the close of 1990, there was talk that the Pirates would send Manahan to the Phillies to complete an earlier deal. In tamping down the speculation, Pirates GM Larry Doughty called Manahan one of the Pirates' "most prized prospects."

But, returning to high-A Salem for 1991, Manahan's average returned to its previous levels. He hit just .211. He moved up to AA Carolina for 1992, doing little better. He hit .221, his final year with the Pirates system.

After going through the Expos and Padres systems, Manahan landed with the Cubs at AA Orlando in 1994. He hit .289 in 55 games there, returning for 1995.

In his final year as a player, Manahan hit just .212. But, in August, he hit the game-winning home run as Orlando beat Knoxville.

"It's great that he came through," Orlando Manager Bruce Kimm told The Orlando Sentinel of Manahan after the game. "He has struggled a bit this year, but the one thing he hasn't lost is his attitude."