After arriving in the pros with the Yankees at short-season Oneonta, though, Nelloms soon realized just how different pro baseball was from college, he told The Constitution.

"I was discouraged at the beginning," Nelloms told The Constitution in August 1988, his first pro year. "I felt like a freshman just entering college. You've got to get used to the idea that there are other good ballplayers here besides yourself."

Nelloms played well enough that year to make single-A Fort Lauderdale in 1989, then return to Fort Lauderdale for 1990. Those three seasons, though, proved the extent of his pro career.

Nelloms' career began in 1988, taken by the Yankees in the 22nd round of the draft out of Western Carolina. He played his high school ball at Redan High near Atlanta.

At Western Carolina, Nelloms made the all-conference team in 1987. He then hit three home runs and a single in a April 1988 game.

He returned to Fort Lauderdale for 1990 and started the year in a game with three hits in four at bats. He got into 120 games on the year and hit .236. That season marked his last as a pro.

Nelloms went on to become a coach - and a high school administrator. He served as an assistant for his old school Redan, then took over at another school, Clarkston, in 1997.

"We've got a good nucleus of young kids and a positive attitude," Nelloms told The Constitution then. "Our main goal is to improve with every game we play." 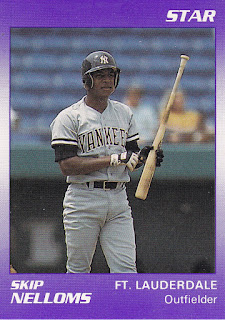