Originally published June 11, 2017
That Rusty Harris led off this May 1991 inning with a double isn't so much interesting as the pitcher he hit it off.

Playing with the Astros at AA Jackson, Harris hit that double off former Cy Young and Rookie of the Year winner Fernando Valenzuela.

Valenzuela pitched with the Angels for AA Midland, trying to make it back to the majors. Harris worked to get there for the first time.

Valenzuela made it back to the bigs. In six professional seasons, though, Harris never made it. He made AAA, but he didn't make the majors.

Harris' career began in 1987, taken by the Astros in the 13th round of the draft out of Lewis-Clark State College in Idaho.

With the Astros, Harris started at short-season Auburn. He got into 64 games and hit .216. He then played 1988 at single-A Osceola and AA Columbus. He hit .210 on the year over 85 games. He went 2 for 4 in a May game for Osceola and moved up to Columbus in June. 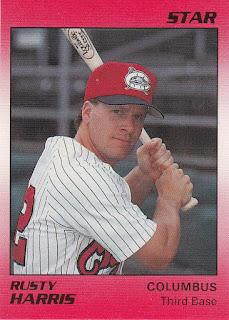