John Sheehan picked up a three-inning save at single-A; Saw six pro seasons, made AA

Originally published Aug. 11, 2016
John Sheehan let some base-runners on in this April 1987 game, but he still picked up the save - a three-inning save with a single-run lead, according The Spartanburg Herald-Journal.

Sheehan came on in the seventh for single-A Asheville and got out of a two-runner jam with a pop out and a fly out. He then got out of small rally attempts in the eighth and ninth to seal the victory, The Herald-Journal wrote.

Sheehan picked up that save in his third season as a pro. He went on to play in two more years. He made AA, but he never made it higher.

Sheehan's career began in 1985, taken by the Astros in the 9th round of the January draft out of Ocean County College in New Jersey.

Sheehan started with the Astros in the rookie Gulf Coast League. In five outings, four starts, he gave up six earned in 15.1 innings of work.

He moved to single-A Osceola and Asheville for 1986, getting into 28 games between them, starting six. He went 5-2, with a 4.75 ERA. He threw an inning in an August game without giving up a hit.

Sheehan then started 1990 at AA Columbus, but got into only eight games. He gave up 11 earned in 22 innings of work. He then moved to the Mariners and high-A San Bernardino. In 22 outings there, he posted a 6.19 ERA, ending his career. 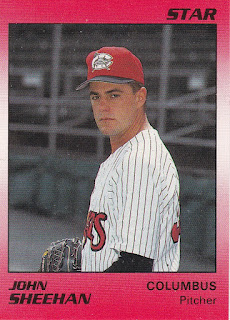