Bill Kazmierczak turned some heads in the minors in 1988. Two no-hitters at single-A and taking a perfect game into the seventh at AA will do that.

After the perfect game bid that July with Pittsfield, Kazmierczak's manager Jim Essian marveled at Kazmierczak's success, according to The Burlington Free Press.

It may have been, but Kazmierczak never got to experience that kind of success, or even the majors. Shoulder troubles that began around the time of his 1988 no-hitters ultimately ended his career. He topped out at AA.

Kazmierczak's career began in 1986, taken by the Cubs in the sixth round of the draft out of Lewis University in Illinois.

Kazmierczak made his college's Hall of Fame in 2002. In 1985, his junior year there, he struck out 20 batters in a game. He struck out 380 over his college career. He also won several honors at the school, including All-American first team.

Kazmierczak then played 1987 between Peoria and single-A Winston-Salem. He went 9-5, with a 4.14 ERA. He returned to Winston-Salem to start 1988, then got his two no-hitters by the end of May.

His first came in an eight-inning contest where no one realized what had happened until the game was over, he recalled later to UPI. The second one he knew what was in progress.

"Knowing about it brought a lot of excitement," Kazmierczak told UPI.

Kazmierczak pitched the second half of the year at Pittsfield, but his shoulder troubles had begun, he recalled to MiLB.com in 2008.

"My shoulder didn't bother me during the first one," Kazmierczak told MiLB.com. "During the second one, it started to act up. It was very minimal, but shortly after the second one the irritation I was feeling turned out to be a rotator cuff. It was something that was gradual."

Kazmierczak went on to return home to Illinois. By 2008, when he spoke to MiLB.com, he'd become a police officer. 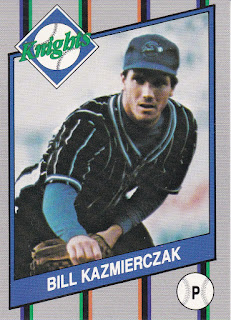