Originally published Nov. 9, 2010
Coming out of the 1988 draft, Tom Fischer was happy to be assigned that year to single-A Lynchburg, according to The Milwaukee Sentinel. The Red Sox first-round pick found the level of play challenging.

"Basically, the competition is about the same as college, but the difference is the teams are solid all the way up and down," Fischer told The Sentinel. "Everybody is a tough out."

Fischer started off strong. He spoke to The Sentinel that July, after his first two starts where he went 2-0 with a 1.50 ERA. But he wouldn't continue that pace. In a seven-season professional career, Fischer made it to AAA, but no higher.

Fischer joined the Red Sox system in 1988 out of the University of Wisconsin. He also joined an organization where he had already had a connection. His uncle was Boston pitching coach Bill Fischer.

It was Pawtucket again for 1992, switching to mainly relief. He picked up three saves, the first coming in a May contest. But in 36 outings, his ERA topped 6. Fischer returned to AA New Britain for 1993, but it was a brief return.

In 16 outings and 17.1 innings for Jim Pankovits' New Britain Red Sox, Fischer gave up 24 earned runs. He gave up a grand slam April 30 against Albany. Another two weeks and the former No. 1 pick was released.

Fischer is not recorded as playing during the 1994 or 1995 seasons. But he is recorded as coming back for a final season in 1996 with his hometown independent team in Madison. 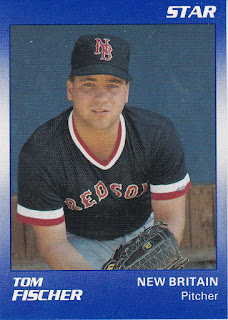