Todd Mayo's University of California team took the close loss on a late home run in this April 1988 game, but Mayo knew it could have easily gone the other way, according to The San Francisco Examiner.

The close loss came after the club had lost seven of their previous 13 games, The Examiner wrote.

"In baseball, you're always going to slump," Mayo told The Examiner. "You're going to get them. If that ball doesn't go out, we win. You never know what's going to happen."

Mayo went on to turn pro the next season, in 1989. For him, what happened in the pros ultimately spanned five seasons. He made AA.

Mayo's career began that in 1989, taken by the Expos in the 32nd round of the draft out of Cal. He earlier graduated from Los Gatos High School in California.

At Los Gatos, Mayo played football and baseball and he made the school's Hall of Fame.

That July, he commented to The Palm Beach Post about the team's good pitching.

"We know that with our pitching, it might just take a hit or two for us to win," Mayo told The Post. "It's kinda been a crazy year."

Mayo returned to West Palm Beach for 1991 and got a 17-game look at AA Harrisburg. He picked up two hits and a stolen base in a May game for West Palm Beach. He hit .251 overall.

He then saw Harrisburg again for 1992, but his season proved brief. He saw five games that year and went 1 for 12 to end his career. 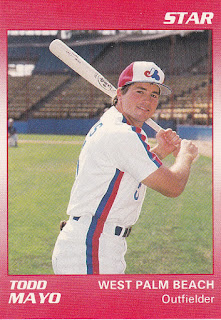