Sean Cunningham served as minors trainer, later on staff in Montreal and as head trainer with Marlins 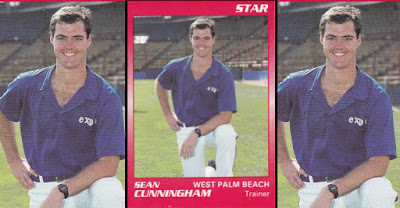 Marlins head trainer Sean Cunningham explained to The Associated Press in 2003 the difference in baseball players and those from other sports.

Those differences could be exacerbated by playing every day, letting nagging injuries go without proper training attention, he told The AP.

"There's more than looking physically impressive," he said. "Sometimes just because you look good aesthetically, it's not the best for the sport," Cunningham told The AP then. "In baseball, you're dealing with fine motor skills. You don't necessarily have to be an 'athlete' to throw a ball 95 mph."

Cunningham started at Canisius University in Buffalo, where he graduated with a degree in sports medicine and physical education.

He then joined the Expos in 1987 as trainer at single-A Burlington, then 1988 at Rockford and 1989 at AA Jacksonville.

"It was a lot like that tripleheader we played last season against St. Lucie," Cunningham told The Palm Beach Post then. "It was a long night."

Cunningham continued with the Expos on up to Montreal, where he served strength and conditioning and team travel coordinator from 1997 to 2001.

He then moved to the Marlins for 2002 as major league trainer. That July, he oversaw blister issues for young hurler Josh Beckett, including the store-brand rice used to keep Beckett's finger dry.

"This has been very resistant, stubborn. A lot of it has been Josh learning his own body," Cunningham told The Post of Beckett. "It's a full-time job for him to take care of it."

Cunningham stayed with the Marlins as head athletic trainer into 2016, when he stepped down. Cunningham in 2021 is serving on the athletic training staff at Palm Beach Atlantic University. 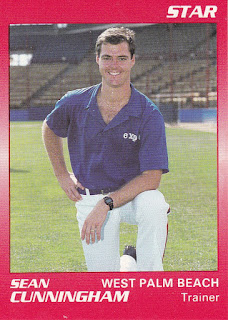