Rod Boddie hoped for the majors, but knew he'd go to law school; Missed on bigs, then became lawyer

His future, he hoped, included more baseball and even the major leagues. But, whether or not that future happened, he had another future: Law school, he told The Post then.

"At some point, whether it's one year from now or 10 years from now, I'm going to law school," Boddie told The Post then. "I think I'd like to be a prosecutor someday."

Boddie never did make the majors. But he did go to law school and soon after that interview with The Post.

He left baseball behind less than a month afterward to begin his legal studies and he's been in law since. He continues in 2021 as a principal for a legal training and consulting company in his native Virginia.

Boddie's baseball career began in 1988, taken by the Expos in the 13th round of the draft out of James Madison University in Virginia.

At James Madison, he won multiple honors in 1988, including All-America, all-region and team MVP. he hit .438 that year. He picked up 265 hits over his college career, still good for seventh-best all-time at the school. His 18 triples remain first all-time there.

He arrived at high-A West Palm Beach for 1990. He hit his first triple that year in early May, knocking in two runs in a 7-5 win, The Post wrote.

"I'm notorious for getting off to a slow start, but I'm not worried," Boddie told The Post of his late first triple. "I've been feeling pretty good at the plate."

But, but late July, he was on his way out and on to law school. The Miami Herald noted his plans to attend the University of Virginia's law school. Then, on July 31, he hit a two-run single in his final game before heading off on the path to his new career.

Boddie then got his J.D. from Virginia. He practiced four years at a Baltimore based firm, then served as senior counsel at a fixed wireless broadband service provider. More recently, he serves as a principal of the Wickford Group, a legal training and consulting company and also as general counsel for Seneca One Finance, a specialty finance company, according to his Wickford bio. 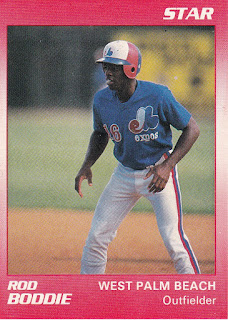