Rob Mason's Northeast Pensacola team of 9-year-olds took the Dizzy Dean World Series in summer 1999 and Mason explained how: With fundamentals, according to The Pensacola News Journal.

"We played a lot of games against 10-under teams and we took our lumps," Mason told The News-Journal. "But they learned something positive. They hung in there and it paid off."

Mason coached those kids with experience from the pros. Years earlier, Mason spent four seasons in the Expos system. He topped out at high-A.

Mason's pro career began in 1987, taken by the Expos in the 21st round of the draft out of the University of New Orleans and Jefferson Davis Junior College in Alabama. He played his high school ball at Pensacola's Tate High.

Mason made single-A Rockford for 1989. His season included the unusual situation where he - and an opposing player - was pressed into service as an umpire after the home plate umpire became ill in the second inning. He saw just 13 games overall that year. 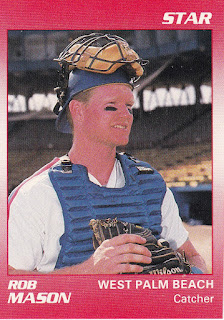