Pete Young made the majors with the Expos over two seasons, helped start agent's career

Pete Young looked ahead to the 1992 season and he seemed to have a good shot at making the majors, he told The Associated Press in his home state of Mississippi.

Everything had worked out to the point, including getting to go to spring training with the team, he told The AP early that April.

"The worse thing that can probably happen is that I will spend a month or two in Triple-A," Young told The AP. "Hopefully I'll get a shot (with the Expos) at the middle of the year."

Young did get his shot that year, and the next. His shots amounted to 17 total relief appearances with the Expos, the extent of his major league career.

Young's pro career began in 1989, taken by the Expos in the sixth round of the draft out of Mississippi State University.

Young signed with the Expos with the help of new agent and Mississippi Stater Bo McKinnis. Young was McKinnis' first client. McKinnis went on to serve as an agent for many others, including David Price.

The Expos would later use Young as a reliever, as he'd been used in college. But his early time was marked by at least some use as a starter.

"In college I could overpower everybody," Young explained to The Jackson Clarion-Ledger that July in 1989. "Now, since I'm starting, I have to use some other pitches. ... Now I've got to be more of a pitcher."

He then started 1992 at AAA Indianapolis and, in June, debuted in Montreal. He got into 13 games, all in relief, for the Expos. He gave up nine earned in 20.1 innings of work.

Young returned to the majors in 1993 for four more appearances. He gave up two earned in 5.1 innings. He played the rest of the year at AAA Ottawa.

He moved to the Red Sox system for 1994. He spent most of the year at AA New Britain. That season marked his last as a pro.

By June 1995, Young was back at Mississippi State with hopes of being a coach, The Clarion-Ledger wrote.

"I had a couple offers, but nothing really interested me," Young told The Clarion-Ledger of his career's end. "It just wasn't as much fun as what it used to be. I was really frustrated. Maybe I had just reached my peak. I was just kind of burned out." 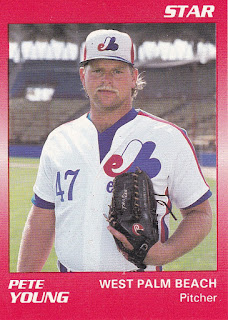