Top pitching prospects for three teams took the field in West Palm Beach for the fall Instructional League games in September 1989, including those from the Expos and the Braves, The South Florida Sun Sentinel wrote.

Among those there was Expos minor leaguer Paul Ciaglo. He's one of three Expos players identified in the story's photo.

"They're all raw," Braves camp coordinator Fred Koenig told The Sun-Sentinel of the players there. "Hopefully next year they can go out (and be) comfortable at the A level so it's not a mystery to them."

Ciaglo briefly played for the Expos at short-season Jamestown that year. The next year, he briefly played at high-A West Palm Beach. Those two brief seasons proved his only time in the pros.

Ciaglo's pro career began in 1989, taken by the Expos in the 12th round of the draft out of the University of Massachusetts Amherst.

At Amherst, Ciaglo led the conference in strikeouts per nine innings at 13.3 as a junior in 1989, his final college campaign.

He threw a complete game, seven-hitter in March 1989 against Iowa. He threw a three-hitter the next month against St. Joseph's and another seven-hitter later in April.

With the Expos, Ciaglo started with short-season Jamestown. He started four games there, went 0-2, with a 4.19 ERA.

He then returned for 1990 at West Palm Beach, but he got into only a single game, one inning. He gave up two runs in that relief appearance, marking his last pro appearance. 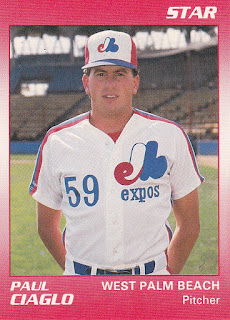