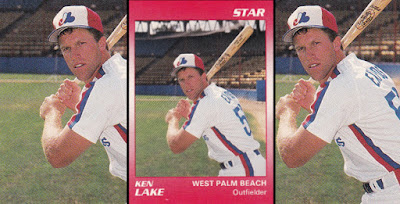 West Palm Beach's Ken Lake entered this May 1990 game hitting just .125. But it he left it with the big hit, according to The South Florida Sun Sentinel.
In the sixth inning, with two men on, Lake hit his second home run on the year to give his team the lead in a game they went on to win, The Sun Sentinel wrote.
"The key was Lake's home run," Lake teammate F.P. Santangelo told The Sun Sentinel afterward. "It woke everybody up. Every day, it's a new hero."
Lake hit that home run in his third season in the pros. He went on to play in one more. He topped out at AA.
Lake's career began in 1988, taken by the Expos in the 39th round of the draft out of the University of Wyoming.
At Wyoming, he is considered one of the top players to have played at the school. In 2004, he remained second on the school's all-time RBI, home run and runs lists and fourth in hits.
With the Expos, he started in the rookie Gulf Coast League. He hit .269 in 58 games. He then played 1989 between single-A Miami and short-season Jamestown. He hit .223 between them, with 16 home runs.
Lake then played 1990 at high-A West Palm Beach an hit .245 on the season, with seven home runs.
He played 1991 largely back at West Palm Beach, but he also saw nine games at AA Harrisburg. He went 1 for 11 there.
At West Palm Beach, he hit two home runs in a June game and picked up two hits and two RBI in a June game.
In mid-August feature on the ending of the season drawing near, The Palm Beach Post highlighted a scene where teammates attempted to lift Lake after a bad game where he'd been thrown out stealing in the ninth. The teammates did so by sitting down with him.
"Just trying to pick me up," Lake told The Post of the scene. "That's important to me. I had a real bad game and they saw me sitting there."
That game turned out to be among Lake's last. His career ended with season's end. 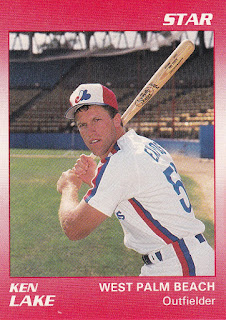