John Wenrick got good action on his fastball in 1986 game; Saw five pro seasons, made high-A

John Wenrick's fastball had good action on it this night in August 1986. The result for his rookie Kingsport squad, a four-hitter and a 1-0 loss, The Kingsport Times-News wrote.

"It's the game I've been waiting to pitch all season," Wenrick told The Times-News afterward.

Wenrick pitched that game in his first professional season. He went on to see four more. He topped out at high-A.

Wenrick's career began that year in 1986, taken by the Mets in the third round of the secondary phase of the June draft out of Long Beach City College.

Wenrick moved to single-A Columbia for 1989. He started the year with an exhibition against the University of South Carolina, but had a rough start. He went three innings and gave up five earned. He also walked three.

"It's unusual for him because he doesn't walk people that much," Wenrick's manager Bill Stein told The Greenville News then. "That's not the John Wenrick you'll see during the year. He usually goes right after the hitters." 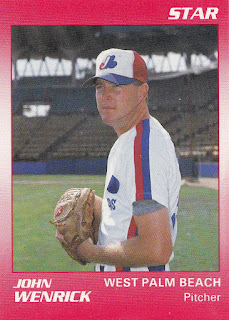