John Stearns' seasons changed from playing in the majors to coaching, managing and scouting 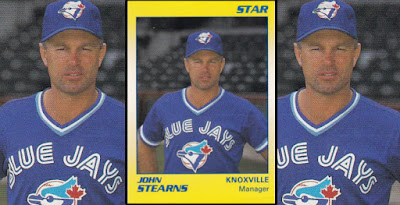 Originally published March 20, 2013
John Stearns' Harrisburg Senators didn't get the win this night in 2009. They also didn't lose - the game got suspended in a tie after nine innings when rains came.

Stearns, though, saw the game, and his team's effort, as an omen for the rest of the year, according to The Harrisburg Patriot-News.

"It's a sign of the season changing," Stearns told The Patriot-News afterward. "We've turned a corner, and I think we can be a pretty good team from here until the end of the season."

Stearns spoke in his second year as manager for the club, after a two-decade-long coaching and managerial career. That career came after a playing career that itself lasted more than a decade, including 11 seasons with time in the bigs.

Stearns' career began in 1973, taken by the Phillies in the first round of the 1973 draft, out of the University of Colorado.

Stearns started at AA Reading, making AAA Toledo in 1974. That September, he also made Philadelphia for a game.

Stearns was then traded to the Mets, returning to the majors for 59 games in 1975. Stearns would end up playing in Queens each year thereafter though the end of his big league career in 1984.

From 1977 to 1979, the catcher Stearns got into more than 130 games each season. In August 1978, Stearns' manager Joe Torre told The Associated Press he saw a player who was more focused.

"He's relaxed and it's made him a better player," Torre told The AP. "Now when he doesn't hit, it doesn't affect his catching, which is what I like."

He played is final major league game in 1984. By 1989, Stearns had started his coaching career, serving as bullpen coach for the Yankees in the Bronx.

In July 2001, the Mets were falling behind. But Stearns told The New York Times the team had a chance.

"We think we're close to winning some games," Stearns told The Times. "We're in every game. There's a lot of coaching left to do. We're not out of this. We feel we can win 20 of the next 25 games."