Jim Faulk had a good run in May 1990 and he credited his manger at high-A West Palm Beach Felipe Alou, according to The Palm Beach Post.

In his game, he doubled and scored and knocked in a run late on a single, The Post wrote.

"I had been lifting my head during my swing and Felipe told me to keep it down," Faulk told The Post then. "I think that's made a big difference for me the past couple weeks."

Faulk got that tip in his fourth season as a pro. He went on to play in one more. He topped out at AA.

Faulk's career began in 1987, taken by the Expos in the 41st round of the draft out of Louisburg College in North Carolina.

He returned to West Palm Beach, then high-A, for 1990. He went 3 for 5 in a late-April game, with a stolen base, and gained praise from his manager, Alou, in The Post.

"He's one guy who can really challenge the wind," Alou told The Post afterward. "I thought it was just a matter of time." 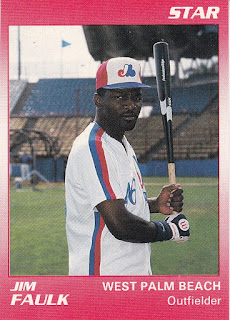