Originally published Jan. 8, 2014
Fresh off his major league debut, Jeff Plympton told the Bangor Daily News he was ready to do whatever the team needed him to do.

"I'm the 11th pitcher on an 11-man staff and I've got to work my tail off to show that I belong here," Plympton told the Daily News. "If I get people out and do my job, I might stay around for the season."

Plympton was around for the end of the season, but just not straight through. He also wasn't around in the majors again.

Plympton's major league career began and ended in 1991. It also lasted all of four outings, and ended with an ERA of 0.00.

Plympton's professional career began in 1987, taken by the Red Sox in the 10th round of the draft, out of the University of Maine. He grew up in Massachusetts, graduating from King Phillip High School in Plainville.

At Maine in 1986, Plympton helped his team to the College World Series. Going into the tournament, Plympton told the Daily News of the importance of his and his teammate's changeup.

"At this level, hitters one through nine are capable of hitting the ball out of the park," Plympton told the Daily News. "You've got to mix it up and show them a third pitch or they'll kill you."

With the Red Sox, Plympton used his changeup and other pitches in starting at AA New Britain. He got into 23 games there, six starts. He had a 3.82 ERA.

In those four major league outings, Plympton pitched 5.1 innings. He gave up five hits, but he gave up no runs.

Plympton played two more seasons, but never made it back to the majors. He has since returned to Massachusetts, serving as recreation director for the town of Wrentham.

The former Red Sox hurler with the 0.00 ERA has also returned to Fenway with other former Red Sox. In 2012, he was there for the park's 100th anniversary. On the occasion of Fenway's 100th, Plympton recalled his original move up to Boston to Wrentham Patch.

"That was a huge thrill for me just to get to Pawtucket at the time because I spent so much time as a kid going to Pawtucket games," Plympton told Patch. "Then to get the call to Boston is an amazing emotion that you can’t even describe." 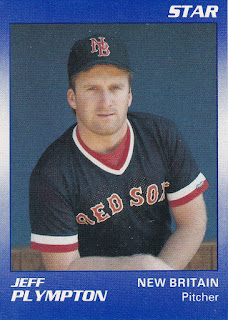