Doug Piatt couldn't believe he was in the majors; Saw 21 games with Expos in 1991

Doug Piatt thought he did well in this June 1991 game. But the newly minted Montreal Expo was just glad that first major league outing was out of the way, he told his college town's newspaper, The Bowling Green Daily News.

In his fourth professional season, Piatt had made the bigs. His debut that June lasted two innings and he didn't give up a run, The Daily News wrote.

"I can't believe I'm up here," Piatt told The Daily News then. "It's always been a dream, always been what I've wanted to do. I've kind of been riding a cloud. I'm in total shock."

Piatt went on to get into 21 games that year in Montreal. His professional career eventually spanned a decade. Those 21 big league outings in 1991 turned out to be his only outings in the majors.

Piatt's career began in 1988, signed by the Indians as a non-drafted free agent out of Western Kentucky University.

Piatt started with the Indians at rookie Burlington and single-A Waterloo. He went 2-1 between them in 28 relief outings, with a 2.61 ERA.

He moved from to single-A Kiston and short-season Watertown, then, mid-year, to the Expos and single-A Rockford. He then made high-A West Palm Beach and AA Jacksonville in 1990. He saw 21 relief outings at West Palm Beach that year and turned in a 0.99 ERA.

After feeling frustrated in the Indians system, Piatt felt comfortable with the Expos, he told his hometown Pittsburgh Post-Gazette in May 1990.

"I have no complaints where I'm at," Piatt told The Post-Gazette. "I'm getting a fair shot to prove myself. It's up to me where I go from here."

From there, he went to AAA Indianapolis to start 1991, then to Montreal in June. He returned to the minors in July, but got back to the bigs in September. In July, he spoke to The Post-Gazette about getting back up.

"I need to be more productive on my slider and throw it for first-pitch strikes," Piatt told The Post-Gazette. "In the majors, anybody can hit a 90 mile-per-hour fastball. I'm also working on a split-finger fastball and an off-speed pitch."

Piatt returned to the minors in 1992 and played largely at AA Harrisburg. He then saw the Pirates and Royals systems for 1993, then independent Beaumont for 1995. He briefly saw AAA Phoenix with the Giants for 1995, before returning to independent ball for good. 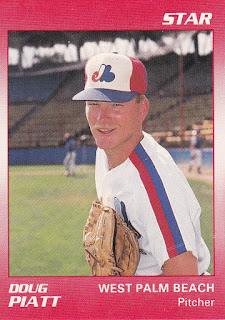