Chris Pollack returned from rotator cuff surgery for four more seasons, but had no Hollywood ending in bigs

After losing his third pro season to rotator cuff surgery, Chris Pollack returned in 1990 at high-A West Palm Beach and showed he could still pitch, according to The Palm Beach Post.

By early May, he had a 3.23 ERA and, as The Post wrote about him, he'd threw seven innings of one-hit ball.

"After tonight's game, I'm convinced (Pollack) is OK," West Palm Beach manager Felipe Alou told The Post. "Any time you have surgery, especially if you're a pitcher, there's some question if you can go out and do the job every five days. He's shown me he can do that."

Pollack's return to the field ended up getting him a total of four more seasons, two of those in AA. He never made the majors,

But, Pollack's baseball career didn't have a Hollywood ending, he actually had his own Hollywood beginning as the son of a movie producer and costume designer, as well as nephew to an Oscar-winning director.

Pollack's baseball career began in 1987, taken by the Expos in the 10th round of the draft out of Florida State.

Pollack's background included his movie connections, his father was Bernie Pollack and uncle Sydney Pollack. He'd spent time on movie sets, including time with one of his dad's closest friends, Robert Redford, on the set of "The Natural."

He spoke with The Post in June 1990 about the similarity between  the two professions, baseball and movies.

"The big thing about both professions is getting the breaks," Pollack told The Post. "You're trying to make a name for yourself. A lot of times it depends on the breaks you get."

At Florida State, Pollack helped his team to the 1987 College World Series in Omaha. He also threw a six-hit, complete-game shutout to keep his team alive, an outing Polllack called his best of the year, according to The South Florida Sun Sentinel.

"It couldn't have come at a better time," Pollack told The Sun Sentinel. "My breaking ball wasn't as good as I would have liked it, but my fastball was better than it has been."

He then returned for one more season, with independent Thunder Bay in 1993, to end his career. 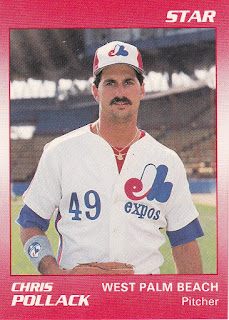