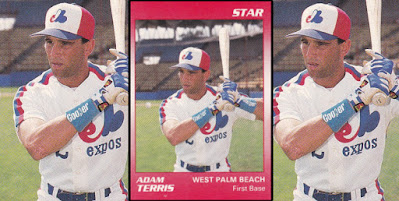 Adam Terris earned a scholarship to LSU and played well his freshman year. Grades, though, weighed him down and he ultimately had to leave, according to The Miami Herald in May 1987.

But, after time away from college and the game working in a grocery store, Terris returned to school and to the field at Miami-Dade College. He soon hit a team best .457 and, more importantly, turned in a 3.3 GPA, The Herald wrote.

"I dedicated myself and I didn't worry about the grades," Terris told The Herald then. "It was just a pleasure playing baseball. It was a good, good year."

Terris' dedication not only got him back on the field in college, it also got him back to LSU - and to the pros. His pro career lasted two seasons. He made high-A.

Terris' career began in September 1988, signed by the Expos as an undrafted free agent out of LSU.

Terris went to LSU out of Miami's Killian High. There, he hit .409 and won Herald first-team area honors.

After staring at LSU and then heading to Miami-Dade, Terris returned to LSU in 1988. That April, he was hitting .325, with five home runs and 31 RBI. He tied for his team lead in doubles, with 14.

Terris then signed with the Expos later that year and hit the field in 1989 at single-A Rockford. He got into 120 games there and hit .281.

He then moved to high-A West Palm Beach for 1990. He hit a three-run home run in a May game. He hit another home run in a playoff game that September. Overall, He hit .250 over 108 games, with five home runs to mark his final season as a pro. 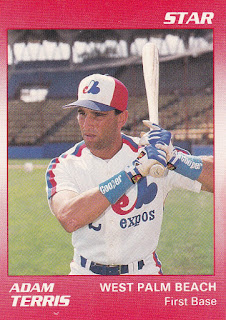