Four scouts traveled Pennsylvania's Archbishop Wood High in May 1985 to watch Rob Kerrigan pitch, but Kerrigan felt no nerves, he told The Philadelphia Inquirer then.

That's because he'd been in many high-pressure situations already, including throwing for Expos brass the previous summer, The Inquirer wrote.

Kerrigan made enough of an impression with the Expos to sign with them the next summer. His pro career ended up lasting five seasons. He made high-A.

Kerrigan's career started in 1986, signed by the Expos as an undrafted free agent out of Bucks County Community College in Pennsylvania.

When he signed with the Expos, he joined the organization where his uncle still worked as a the big league club's bullpen coach. The signing also came after another tryout, one where he threw to his uncle.

"My uncle got me the chance and I did fabulous," Kerrigan told The Philadelphia Daily News. "It felt funny, having my uncle involved, but he couldn't do anything for me except catch the ball. I tried to block everything out and pretend I was throwing to someone else."

He spent much of 1989 back at Rockford, then arrived at single-A West Palm Beach at year's end. He picked up a late-August save there, giving up a single hit in 2.1 innings of work, The Palm Beach Post wrote.

"I was just slinging it at first and getting inside too much," Kerrigan told The Post afterward. "(Coach) Dave Tomlin told me to get on top. From there on, it was smooth sailing."

Kerrigan returned home to Pennsylvania, then relocated to the Houston area in 2007. In 2019, he founded Texas Dawgs Baseball and continued a president and chairman in 2020. 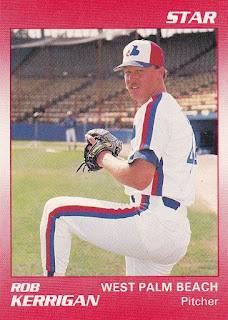