Rob Fletcher had chance to end his team's five-game losing streak in this May 1989 contest and he took it, The Sarasota Herald-Tribune wrote.

With the score tied in the ninth and the bases loaded, Fletcher hit one off the outfield wall to plate the winning run, The Herald-Tribune wrote.

"I'm very proud of our kids, to be honest," Sarasota manager Tony Franklin told The Herald-Tribune afterward. "We haven't been winning but they've continued to battle."

Fletcher hit that game-winner in his second season as a pro. He went on to see time in two more minor league campaigns. He topped out at high-A.

Fletcher's career began in 1988, taken by the White Sox in the 50th round of the draft out of the University of Alabama. Fletcher was also credited as Bob Fletcher, Bobby Fletcher and Robert Fletcher.

Fletcher started with the White Sox in the rookie Gulf Coast League. He hit .250 in 57 games there, with 20 stolen bases.

For 1990, he moved to the Expos system and high-A West Palm Beach. In June, The Palm Beach Post cited Fletcher going from first to third on a sacrifice bunt as an example of the team's hustle.

He hit his only home run in 1991 in a June contest against Reno, when the at bat should have resulted in a bunt, The Reno Gazette-Journal wrote.

"He (Fletcher) didn't get the bunt down and then he hits one out," Reno manager Mal Fitchman told The Gazette-Journal afterward. "It happens." 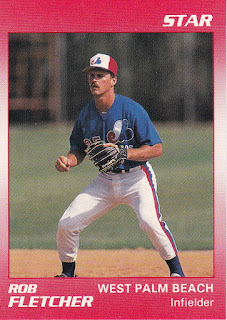