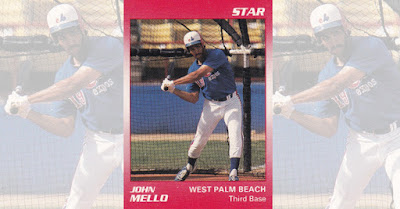 John Mello came through in the 11th inning of this June 1989 game, knocking a game-winning single, The Palm Beach Post wrote.

"Mello is the guy I want up in that situation," West Palm Beach manager Felipe Alou told The Post afterwards. "He's got nerves of steel when it comes to making a big play or stealing a big base or getting a big hit."

Mello got those big hits in his second season as a pro. He went on to play in just one more. He topped out at high-A.

Mello's career began in 1988, signed by the Expos as an undrafted free agent out of Rhode Island Community College and Atlantic Christian College. He played his high school ball at Rhode Island's Johnston High.

He then moved to single-A West Palm Beach for 1989. Despite his manager's words of encouragement, his season was limited to 33 games. He hit .227.

Mello returned to West Palm Beach at high-A in 1990. In one May game, after hitting home runs in the previous two games, he laid down a sacrifice bunt to plate what turned out to be the game-winner, The Post wrote.

"Either a sacrifice fly or a sacrifice bunt, we get the win," Mello told The Post afterward. "I've been fortunate to be swinging the bat well against these guys the last few days. It was just a perfect situation."

Mello hit .212 in 87 games overall that year. He also hit six home runs and stole eight bases. That season marked his last as a pro.

Mello soon returned to Rhode Island, but kept in the game. In 2020, he continues as the owner of the Rhode Island Baseball Institute.

"Coach Mello has always been a strong supporter of youth baseball not only in Johnston where he grew up but throughout the state," Johnston Little League manager Robert Civetti told The Cranston Herald in February 2020. "He is always willing to do whatever he can to help our youth develop into strong players." 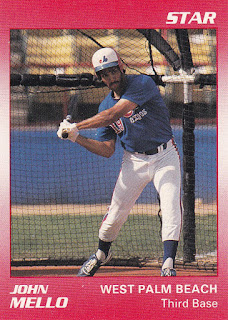